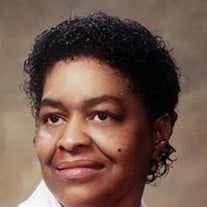 THOMPSON, Ms. Estella L. "Chicken" - age 78, passed away, March 4, 2020 at Select Specialty Hospital-Pontiac. Family hour 10:30AM Saturday March 14, 2020 at St. Stephens Missionary Baptist Church, 69 South Astor St., with funeral service commencing at 11:00AM. Pastor Al James Terrell, Officiating. Interment Perry Mount Park Cemetery, 878 North Perry Street. Friends and pallbearers will assemble at the church 10:30AM Saturday. "Chicken" will lie in state in the Chapel of Lawrence E. Moon Funeral Home, 268 North Perry Street, and may be viewed from 2:00 PM - 8:00 PM Friday. Estella Louise Thompson, known to all as “Chicken” was born on March 19, 1941 in East St. Louis, Illinois. She was affectionately called “Chick” by her grandchildren & great grandchildren. She was the youngest of four children born to the late Erie and Clarence Thompson. She made her transition from this world on Wednesday, March 4, 2020. Chicken accepted Christ as her personal Savior at an early age at the Pilgrim Rest Baptist Church of Illinois. She later rededicated her life to the Lord at New Day House of Praise in Pontiac, Michigan under the leadership of her grandson, Pastor Christophere “Boogie” Thompson. She was a long time member of St. Stephen Missionary Baptist Church. Chicken graduated from East St. Louis Senior High School in Illinois. In 1979, she moved to Pontiac, Michigan to be closer to her sisters, Dorothy Washington and Zola Warner, where she found employment at the Waabeek Country Club as a Prep cook and Pantry chef. She worked there until her medical retirement. “Chicken” will be remembered for her loving attitude and brutal honesty. If she thought it, she said it. She had the ability to light up a room as soon as she walked in. Her presence was immediately felt. Even more so, she was known for her raspy voice. Her voice was just as unique as she was. Estella “Chicken” Thompson lived a full life filled with traveling, love, laughter, and the joy of the Lord. Chicken leaves to cherish her memory, children Kim D. (Charles) Riggins, Gary D. Thompson, and Deborah A. Thompson; grandchildren, Christophere (Natalie) Thompson, Charles (Sylivia) Riggins Jr., Terron (Christina) Riggins, Gary Thompson Jr., and Roy Thompson; great grandchildren, Adriane, Aaron, and Estelle “Essie” Thompson, Pierre, Vincent, Rylee and Zhuri Riggins and Nyla Castillo; siblings, Dorothy Washington, Zola Warner, Tracey and Clifford Thompson, and a host of other family and friends. Ms. Thompson was preceded in death by her parents, Erie Augusta and Clarence Oscar Thompson; brother, Clarence Thompson Jr.; great grandson, De’Ontay Thompson, and best friend Laverne Williams.

The family of Estella L. "Chicken" Thompson created this Life Tributes page to make it easy to share your memories.

Send flowers to the Thompson family.