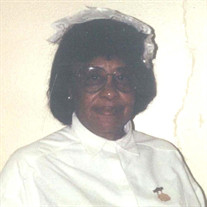 WASHINGTON, Mother Helen K. - age 97, passed away Thursday March 26, 2020 at Regency of Waterford Nursing and Rehabilitation Center. Public Visitation Monday, April 6, 2020 from the Chapel of Lawrence E. Moon Funeral Home, 268 N. Perry Street, Interment Perry Mount Park Cemetery, 878 North Perry Street. Mother Washington will lie in state in the Chapel of Lawrence E. Moon Funeral Home and may be viewed from 2:00 PM – 8:00 PM Monday. Reverend Mother Helen K. Washington was born August 18, 1922 in Eros, Louisiana, the daughter of Elbert and Mary King. Helen, as she was known to most family and friends, graduated from Chatham High, in Chatham, Louisiana, where she loved playing basketball. July 2, 1951, Eli Washington Sr. married Helen King. Shortly afterwards, they moved ton Pontiac, Michigan. They met a friend from down south (Deacon Estrow Hanspard) that introduced them to the Spiritual Israel Church and Its Army. Mother Helen became a minister, Mission Head for Mission Band, A Golden Jewell, which she enjoyed very much and singing her song, “This Train is Bound for Glory.” She also loved planting flowers, word puzzles and writing poetry. Her hobbies were sewing and telling jokes. Helen helped her husband raise four boys and two girls. She loved children. Reverend Mother Washington leaves to cherish her memory: children, Clarence Edward (Shellie) Washington of Lake Orion, MI and Alice Faye France of Pontiac, MI; two special grandchildren, Mecca Sha France and Kacey Davis; a host of other grandchildren; a host of great-grandchildren; sister-in-law, Minnie King of Pontiac, MI; and a host of nieces and nephews. Reverend Mother Washington was preceded in death by her husband, Eli Washington Sr.; children, Exel Bill Washington, Eli Washington Jr., Henry Lee Washington and Catherine Sanders; and brothers, Hollie King and David King. At Lawrence E. Moon Funeral Home, we value the safety and health of our customers, staff and the general public. Therefore, we will adhere to EXECUTIVE ORDER No. 2020-11 issued by our Governor Gretchen Whitmer, regarding assemblages in the wake of the unprecedented health challenge our state and nation is facing. The Executive Order is as follows:Acting under the Michigan Constitution of 1963 and Michigan law, I order the following: 1. Beginning on March 17, 2020 at 9:00 am, and continuing through April 5, 2020 at 5:00 pm, all assemblages of more than 50 people in a single indoor shared space and all events of more than 50 people are prohibited in this state. A single indoor shared space includes but is not limited to a room, hall, cafeteria, auditorium, theater, or gallery. The prohibition on assemblages set forth in this section does not apply to: We do understand that this may pose a challenge to you and your family, but our dedicated staff is here to help guide you towards making the best decisions in memorializing your loved one.

The family of Mother Helen K. Washington created this Life Tributes page to make it easy to share your memories.

Send flowers to the Washington family.