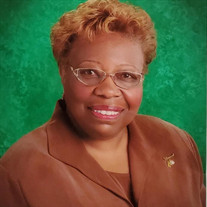 TERRY, Ms. Vivian "Viv" - age 75, passed away Wednesday, December 9, 2020 at St. Joseph Oakland. Family hour 11:00AM Saturday, January, 2, 2021 from the Chapel of Lawrence E. Moon Funeral Home, 268 North Perry Street, with Memorial Service commencing immediately at 11:30AM. Pastor Al James Terrell, Officiating. Family and Friends will gather at the funeral home 11:00AM Saturday. There will be No Public Viewing. Vivian Reed “Pigtail” Terry was born March 18, 1945 to James Hardy and Sarah E. Reed in Williamsburg, Virginia. She grew up in the Grove Community. At an early age, Vivian confessed Christ as her personal Savior and united in membership with the Little Zion Baptist Church in Williamsburg. It was during this time she began lifting her voice singing praises to the Lord. She was preceded in death by her parents, James Hardy and Sarah E. Reed and one brother William E. “Bommer” Reed. In 1963, Vivian graduated from Burton Heights High School in Williamsburg. She continued her education entering the Historic Black College, Johnson C. Smith University in Charlotte, North Carolina. At the University, she continued her love of singing as a 1st soprano in the famed University Choir which toured different parts of the country each spring. During her sophomore year, Vivian was initiated into the Gamma Delta Chapter of Alpha Kappa Alpha Sorority, Incorporated. She participated in many other campus organizations, too numerous to mention. Vivian graduated from Johnson C. Smith University earning a Bachelor of Arts Degree in Elementary Education. She was immediately recruited by the Pontiac Board of Education in Pontiac, Michigan where she began her career as an Elementary teacher at Rodgers Elementary School. She went on to further her Education at Oakland University in Rochester, Michigan earning a Master of Arts Degree in Teaching-Reading. As a result, she became the reading specialist at Longfellow Elementary School. Shortly after this assignment, she was appointed by Dr. Odell Nails, Superintendent of Pontiac Schools, as an elementary school principal at Frost Elementary School. She continued her studies earning an Education Specialist Degree in School Administration. Vivian retired as Principal of Rodgers Elementary School and the Pontiac School District after 38 years of service. Having a desire to continue making a difference in the lives of children, she applied for and was appointed Principal of the Great Lakes Academy in Pontiac, Michigan. After several years of service, Vivian retired from the Academy. Vivian was very active in the Pontiac community. Some of her work included: Member of the Saint Stephen Missionary Baptist Church where she served as a Sunday school teacher, former Church Moderator, former Trustee, sang on the Praise Team and in the Women’s and Combined choirs, member of the Theta Lambda Omega Chapter of Alpha Kappa Alpha Sorority Incorporated, where she was honored as a “Golden Soror” (50 years of membership) in 2016, former President of the Pontiac Civitan Club, former President of the Detroit chapter of Johnson C. Smith University Alumni Association, former President of Pontiac Association of School Administrators and former member of the National Association of Negro Business and Professional Women’s Club. Because of her love of singing, she was also a member of the Pontiac City Wide Choir Union and a former member of the Pontiac Belle Chorale. Vivian now sings with the saints in the Heavenly Choir. Vivian loved people and they loved her. She was always willing to help anyone who needed help and did so lovingly. She will always be remembered as “Vivacious Viv” because of her sparkling personality, spirited laugh and cheerful smile. She will be sorely missed. Vivian leaves to cherish her memory, her precious daughter Phaedra Monique Terry and grandson, Ash’ton Ramone Hughes (who she called “Puddin,”) of Pontiac, MI, one brother, Jerome (Phyllis) Reed of Fayetteville, NC; sister, Kathy Reed Arrington (Rudolph Valentino Arrington, Jr. deceased June 2020) of Williamsburg, VA; two God-daughters, Donna P. McDonald of Duluth, GA and Donita D. Cordell of Auburn Hills, MI; special friends, Lucille Minkins, Mozelle Blakes and Agnes Roberts of Virginia and Dr. Patricia D. Cordell, Daisy L. Davis and Lorraine M. Manning of Michigan and a host of nieces, nephews and other relatives and friends.

The family of Vivian "Viv" Terry created this Life Tributes page to make it easy to share your memories.

Send flowers to the Terry family.