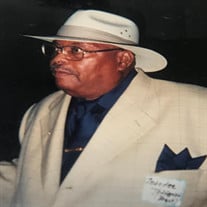 JEFFERSON, Mr. Zebedee "Zeb" – age 85, passed away, Tuesday, November 3, 2020 at Lake Orion Nursing and Rehab Center. Family hour 10:30AM Saturday, November 14, 2020 from the Chapel of Lawrence E. Moon Funeral Home, 268 North Perry Street, with Memorial Service commencing immediately at 11:00AM. Pastor William Bell, Officiating. Family and Friends will gather at the funeral home at 10:30AM Saturday. There will be No Public Viewing. Mr. Zebedee Jefferson was born May 17, 1935 in Tylertown, Mississippi, the son of the late Morris (Mary) Jefferson. He was raised in Marion County of Tylertown, Mississippi. He met Edna Marie (Ree) Brent in Walthall County and later they were married on April 23, 1955. To this union six children were born, Janice, Michael, Ricky, Jerry, Sabrina and Sonya. He attended Hope High School until the eight grade, which was also New Hope Holliness Church. Zebedee worked for many years as a Lift Truck Operator, for Price Brothers Company, where he retired in 1986. Zebedee was the son of a farmer and one thing he loved to do was grow things. And for many years he would win the neighborhood Beautification award. He was known in the neighborhood for having a beautiful yard, flowers and gardens. He leaves us with kind words, love, enjoy life, take care of yourself, and take care of one another. Mr. Jefferson leaves to cherish his memory, children, Janice M. Jefferson, Sabrina Jefferson, Sonya Jefferson, Michael and Ricky Jefferson and Jerry (Claudette) Jefferson; grandchildren, Joy Coleman, Donoven Ratcliff, Joan, Jasmine and Jayla Jefferson; great grandchild, Brooklyn Ratcliff; sister, Claudia “Bee” Dillon and a host of other relatives and friends. Mr. Jefferson was preceded in death by his wife, Edna Marie "Ree" Jefferson; parents, Mary and Morris Jefferson; and eight siblings.

The family of Zebedee "Zeb" Jefferson created this Life Tributes page to make it easy to share your memories.

Send flowers to the Jefferson family.